This program was written by Archangel. With this program it is possible to create custom Twilight releases. This tool was probably used to produce the “bootleg” Twilights 090 to 127.

I had been thinking for some time that it would be handy to
extract loose .RAR files from the games.00x files. As I was
developing the Twilight Extractor (which can be also found at
our site), I learned some things about the Twilight menu structure itself.

So after some tweaking I saw it was possible to create an editor to
create your own Twilight CD’s. So I set to work, first made a parser for
the Twilight script language, and then wrote some code to replace resources
in a Win32 executable without damaging it :-). Once that was done I wrote
the final pieces of code which form the Twilight Script Editor which you now
see before you.

If you have any ideas or suggestions about the Twilight Script editor,
feel free mail me. If they are not impossible <g> to implement, I may
yet implement them. This program cannot be a good program if I don’t get your feedback.

Version 0.9a [6/5/00]
– Fixed the ‘This program must be run under Win32’ error.
– Ins and Del keys used to insert/delete an item changed to ctrl+ins and ctrl+del.
Thanks to Koen H.
– Added automated alphabetic sorting of the entries.
Thanks to Koen H.
– Fixed tabbing sequence in the edit boxes on the general sheet.
– The active control on startup is now the name edit box, not the cdnr spinedit.
– Made the main menubar have the same red selection text as the rest of the menu.
– Placed the about menu choice on the right.

– XRayden for inspiration.
– Koen H. for his suggestions. 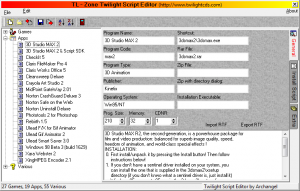 Note: The result of an edited menu does not result in a valid Windows 32-bits application.

You also need any of the menu’s.